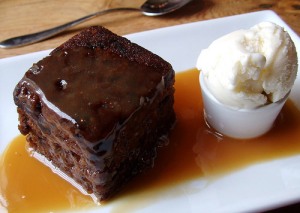 One weekend in 2011, when I was still living in Washington, the Brit and I decided to fly to Pennsylvania and meet each other half way to visit with my parents and to see each other. Prior to arriving at my parents’ house, we had decided we wanted to introduce my family to a traditional English dessert (or pudding, as they refer to it here sometimes) and chose to bake sticky toffee pudding for my family, particularly for my dad, aka the king of desserts. 🙂 (Hey, Dad!)

I found a recipe for the dish, which had U.S. measurements, and we got to work. As you can see from the recipe below, it calls for a water bath. The water bath proved to be a bit of a pain that first time and then again when we made sticky toffee pudding for Mother’s Day dinner in England this year. (Mother’s Day in England was on March 18th. Father’s Day in both the UK and the US are on the same day though. Interesting.) I’m not sure if it is the water bath that is the root of the problem, but the suggested cooking time in this recipe is not nearly enough when baked in the water bath. I think we generally have to bake the cake part for at least 20 minutes longer.

The end result though is delicious and best served warm with the toffee sauce poured generously on top. It’s traditional to also pour custard on top of this dessert in the UK, but I prefer it with some vanilla ice cream. Neither of us had ever made custard before, so we all had a good laugh as the two of us tried to get the consistency and color of it just right before dessert was served at the Brit’s sister’s house! Thankfully, his mum came to the rescue by adding some boiling water to help thin it out and calm down the bright yellow color.

This is the recipe I used from Razzle Dazzle Recipes (please note these are US measurements):

While mixture is standing, into a bowl sift together flour, baking powder, ginger, and salt. In a large bowl with an electric mixer beat together butter and sugar until light and fluffy. Beat in eggs 1 at a time, beating well after each addition. Add flour mixture in 3 batches, beating after each addition until just combined. Add date mixture and with a wooden spoon stir batter until just combined well.

Pour batter into baking pan and set pan in a larger baking pan. Add enough hot water to larger pan to reach halfway up sides of smaller pan and bake in middle of oven until a tester comes out clean, 35 to 40 minutes. Remove smaller pan from water bath and cool pudding to warm on a rack.

Make sauce while pudding is cooling.

Source: Dalvay By The Sea in Prince Edward Island, Canada