This past weekend, we experienced a bit of an Indian summer, so Richard and I wanted to make the most of the good weather and road tripped to Knaresborough in North Yorkshire for the afternoon. I had never been before and it had been years since Richard last visited the town, and since it is only about an hour drive from our house, we thought we’d head that way. 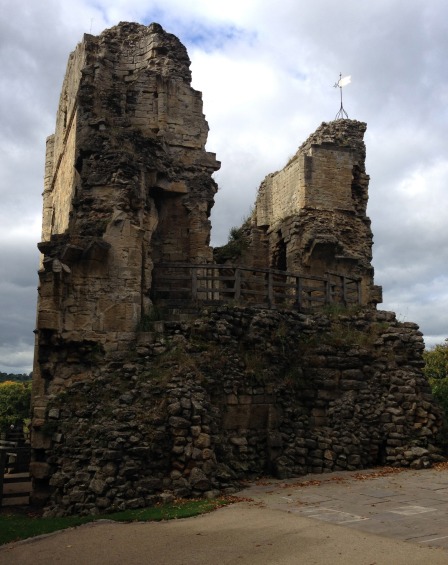 What remains of Knaresborough Castle 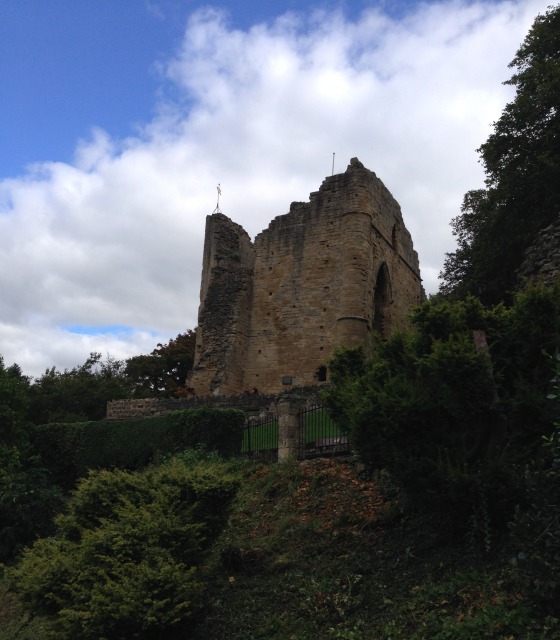 Knaresborough Castle from below 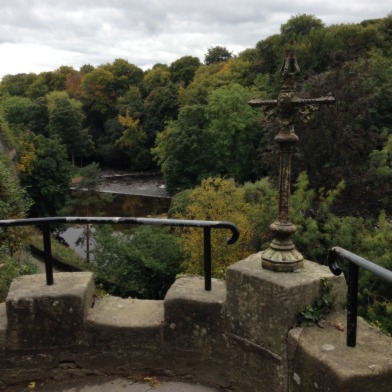 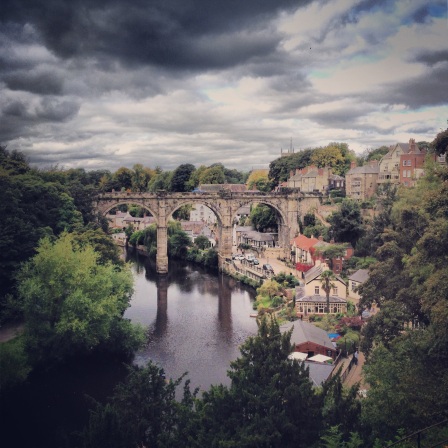 When we arrived we were both hungry and thirsty, so we zoomed around the grounds where the ruins of Knaresborough Castle are located and headed down the steep steps to the River Nidd. We came upon a few tea rooms and cafes along the way until we finally saw The World’s End pub and decided it was the perfect place for us that afternoon. I’m not sure if we were just really hungry or what, but we both really enjoyed our sandwiches and the side of chunky chips that we shared. Bellies full, we set off to explore the town a bit more.

Richard had told me about Mother Shipton’s Cave a few months ago (I have an odd fascination with caves, although this cave isn’t one that you really explore), so when we realized it was a walk across the bridge away, we decided to check it out. We paid our £6 per person (The estate is privately owned, so the admission helps with the maintenance of the park.) and set off on the walk along the River Nidd toward the Petrifying Well and the cave. We paid an extra quid for the guide to the area, so I read that aloud as we went along and we both learned some interesting facts about this supposedly magical place.

Mother Shipton’s Estate is actually the oldest tourist attraction in England and is part of both the Ancient Forest of Knaresborough as well as the Royal Forest. There are two things in particular though that have drawn visitors to the area since the 16th and 17th Centuries. The first being the Petrifying Well, also called the Dripping Well, known for its healing waters and the fact that it ‘petrifies’ items left in its stream of water for 3 months or more. The second being the cave that is the supposed birthplace of Mother Shipton, who was said to have been able to tell the future and apparently prophesied many events in British history. Along the path to the well and cave, there are some great views of the river and the sites along it. 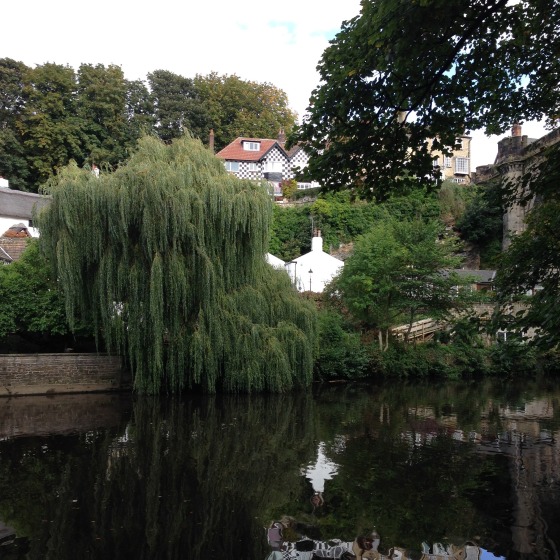 Weeping Willow along the Nidd 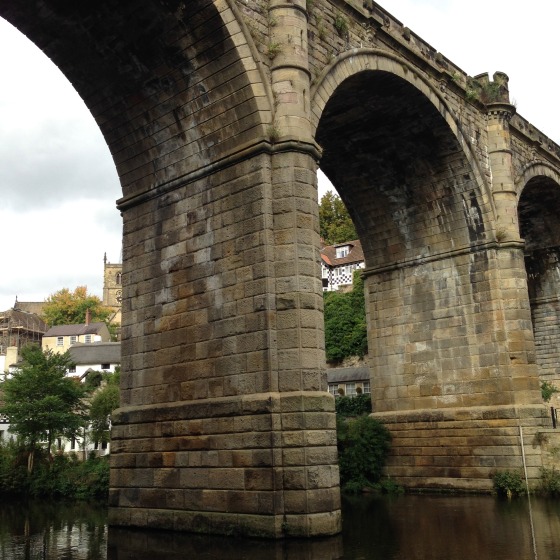 Up close and personal with the Viaduct 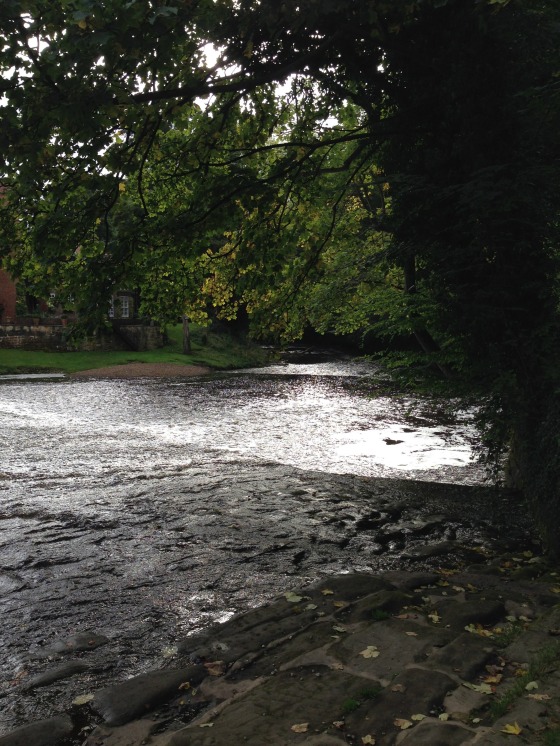 When we came upon the well, I was expecting it to be small and a slow trickle of water. However, it is rather large with the stream originating from an underground lake that keeps the water flowing over the mineralized wall at a steady rate. (The recording at the site did say the exact amount of water that flows over it per hour, but I cannot remember it. I blame baby brain.) People have been visiting the well since 1538 for it was said to have magical healing powers. No longer can you bathe and drink the waters in the well, but rather you will see items (somewhat eerily) hung in the well’s stream of water for petrification. In the tiny museum/gift shop, you can purchase one of their well known petrified teddy bears for around £35. Also, in the museum, you will find a number of items that celebrities have left to be petrified, including John Wayne’s personal hat that he gave to the family when he visited years back. Richard and I were quite mesmerized by the Petrifying Well and stood and stared at it for quite some time whilst listening to the audio recording about its history. 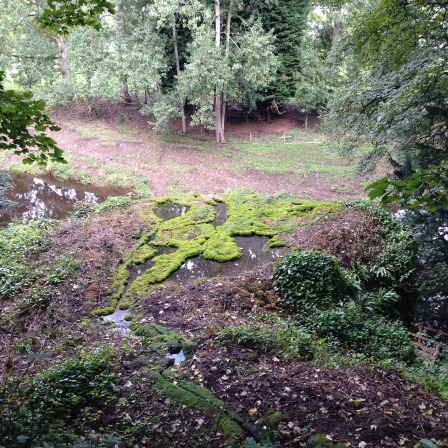 The top of the well 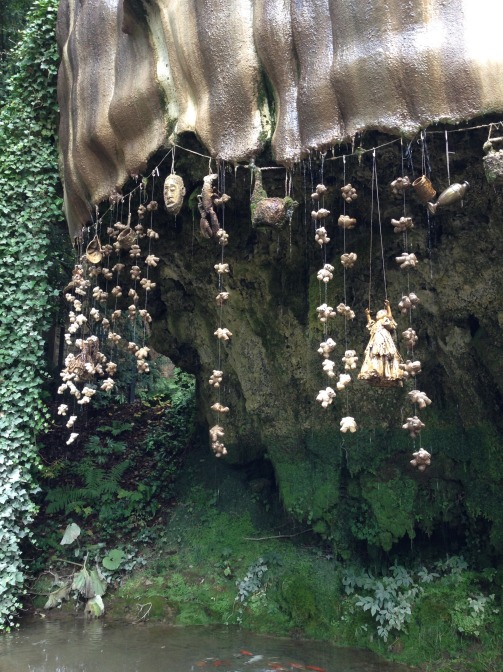 The items being petrified (Isn’t that doll slightly creepy?!) 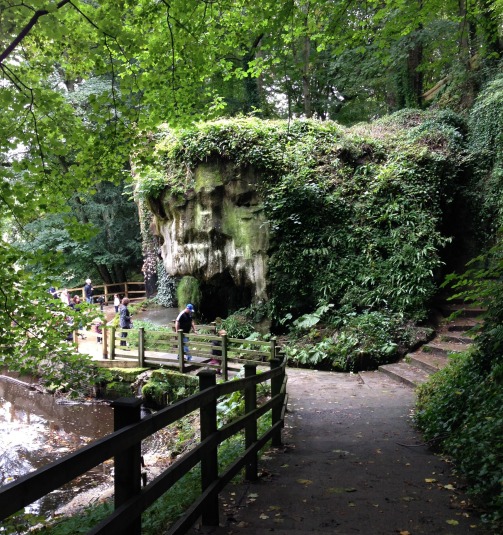 Looking at the Petrifying Well from the cave entrance (The Wishing Well is up the stairs to the right in the photo.)

Just a short walk from the well, you will find Mother Shipton’s Cave where she was said to have been born in 1488 and spent most of her life keeping to herself. As I mentioned above, it is a very small cave, almost like a den which would have provided shelter to her and her mother during their time living there. We sort of walked in and walked out as there isn’t much to see. Right across the way, you will find a Wishing Well, so I dug two 20p coins out of my purse and we followed the instructions on the sign for making a wish properly (keep your right hand in the water while making the wish, do not tell anyone what you wish for, and allow the water on your hand to dry naturally) before having a go. 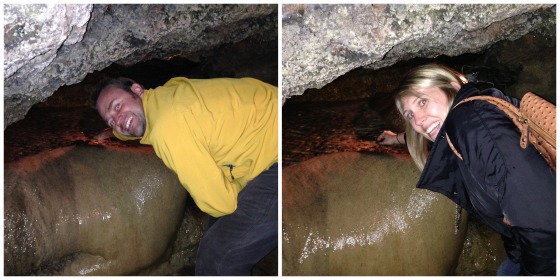 Excuse the red eye. I am still trying to master red eye reduction on iPhoto.

Wishes made and feeling like kids, we continued on the path to the museum and were impressed by the trees – some of which were originally planted in 1739 – towering above us along Beech Avenue. It is described as ‘the largest collection of oldest and tallest Beeches in the country.’ Not only are they old and tall, but they are extremely straight because their location in the gorge keeps them protected from damaging weather. 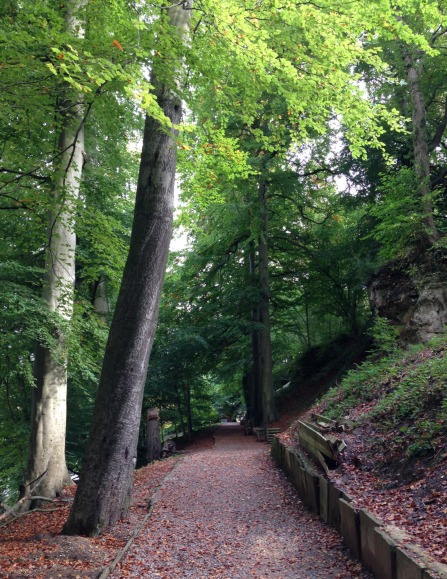 I did mention the museum/gift shop is very tiny, but it is worth a nosey just to see some of the items that have been petrified in the well. It shares more about the legend of Mother Shipton and some information about Sir Edward Slingsby, the man who purchased the land. They also have a cross-section of one of the fallen beech trees from Beech Avenue marked with dates and what happened during those years to show how old the tree actually was, so it was neat to see what the tree had lived through.

After the museum stop, we headed back to the entrance and decided to call it a day. If you find yourself in the area, I do recommend a visit to Knareborough and even to Mother Shipton’s Cave. We both really enjoyed our day out in North Yorkshire (and an added bonus is that parking is cheap in the town car parks)! I definitely could see us going back on a slightly warmer day and having a go in the row boats you can rent to paddle up and down the river. 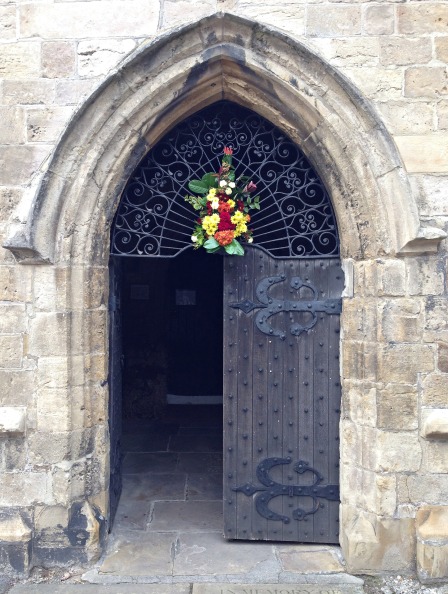 I couldn’t resist snapping this photo as we passed a church walking back to the car. I just loved that the door was half open giving you a tiny glimpse into the dark corridor.

8 thoughts on “Strolling Around Knaresborough”