As I mentioned in this post, Adam and Kayla’s outdoor ceremony was set to begin at 6 PM. We awoke to gray skies and cool temperatures, but still hoped the ceremony could be held outside overlooking the Chesapeake Bay.

The outdoor area, before the rain came, where they were to be married.

The Brit and I headed off on a quick shopping trip with our fingers crossed that the sun and blue skies would still emerge. As we got into my parents’ SUV (4×4 to those of you from the UK!), I had a moment of panic as we both looked at each other and he said, ‘I’m a little nervous about you driving.’ I hated to admit it, but I had to agree and nodded my head. Even though it had only been 4 months since I last drove in the US, I still felt uneasy and found myself second guessing whether I was on the right side of the road or not. This seems odd to me, however, as I do not drive in England (which is actually a story for another day).

We decided to head to a different mall and to Trader Joe’s that morning. We both snagged a few items and wrapped up our shopping trip with lunch at Chipotle. (Yum.) I had to quickly get ready because Kayla’s sister was picking me up soon to head to their parents’ house to be with Kayla and the rest of the bridesmaids. I left myself zero time to properly do my hair and my mom’s makeup, but somehow it all got done just as my ride pulled up to the hotel. (Thank you, Jessi, for being my hair stylist for the day!)

Off we went to see the bride and as soon as we got into the house it was just calm. Kayla was completely fine with the fact that the venue had called and said the ceremony would need to be held indoors. And, I was really surprised by how relaxed it all seemed, not that Kayla is a tense person at all, but she was a bride on her wedding day. However, you could tell she was just ready and really content. She asked me how Adam was, and although I hadn’t seen him, I had spoken to him on the phone twice, so I told her he seemed really good and was hanging out with his groomsmen and friends playing hacky sack. (I seriously thought this game went out of style years ago, but it somehow made a resurgence on their wedding weekend!)

All of us were making sure the bride’s hair was how she wanted it and that she was happy with how she looked in her dress. I get teary-eyed thinking about it, but Kayla looked so much like herself and was smiling ear-to-ear…just how a bride should be on her wedding day! There is something to be said for playing Just Dance on the Wii, having your friends and family do your hair, and doing your own makeup on your wedding day — right, K?!

The limo pulled up and we had a quick photo shoot before we were off to the ceremony…. 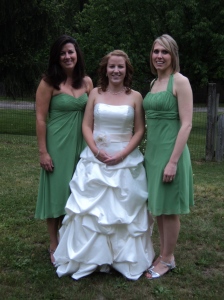 Kayla’s sister, the lovely bride, and me.

Once we got to the venue, the rain had started and everyone was thankful the ceremony was being held inside now. We had a short wait while the final guests arrived and found their seats and then it was time!

As is customary in the US, the bridesmaids enter the ceremony one at a time before the bride walks in with her father. (I’ve seen it done in the UK with the bridesmaids entering both before and after the bride.) I managed to avoid eye contact with Adam as I walked in as I was sure to lose my cool and cry, so I’m sure I was smiling awkwardly and looking either to the side or just above people’s heads.

The ceremony was short, about 15 minutes, but it was extremely heartfelt and touching as the pastor who married them has known Kayla since she was young and is a friend of her family. And just like that, they were Mr. and Mrs.!! (All of our photos from the ceremony are blurry because of the lighting, so you’ll have to imagine it!)

Then, it was time to party…and wow, can this group party! In between the ceremony and the reception though, we had photos taken and munched on some appetizers with the immediate family and wedding party. Soon, it was time for the evening festivities to begin as all of the wedding party plus the parents of the newlyweds were announced and entered the venue once more to watch them share their first dance.

Then, the maid of honor and the best man both gave fabulous toasts as we enjoyed some bubbly. (I had the honor of being the only one to have read the best man’s speech before the wedding and even though I had read and re-read it a few times in the months leading up it still left me in tears — well done, Jon!) We had a nice meal that even featured a Maryland specialty, crab bake, which was delicious. (For those who might not know, Maryland is known for the Chesapeake blue crab.) 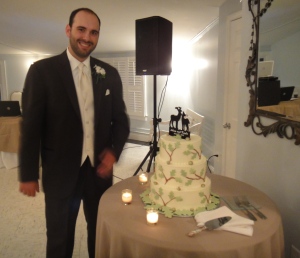 With some of my favorite people!

Immediately after dinner, the bride danced with her dad and Adam danced with our mom. (Best mother-son dance song ever…Sweet Child of Mine by Guns N’ Roses. Oh yes, they did!) And then, the drinks started flowing and the bride and groom got the dancing started and the dance floor was packed for the rest of the night! It was such a great time as is evidenced by the photos below.

My beautiful mom and my handsome brother. 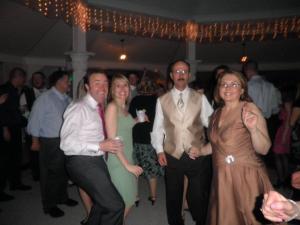 The Brit, me, Dad, and Mom — we had our dancing shoes on all night! (Photo stolen from my cousin — thanks, Erica!)

My beautiful cousins and the best man!

We rock the self portraits…classy!

When we got back to the hotel that night, the emotions of the weekend and of the day just hit me. My little brother was married. When did he grow up?! And, I’m thankful it waited until just the Brit and my parents were around because they understood the tears. It was a fabulous weekend celebrating an even more fabulous couple! I am beyond honored that they asked me to be part of their wedding party as well, so thank you both for allowing me to be part of it.

And, as they say in England, I am absolutely chuffed to bits for them!

Big love and many congratulations to Adam and Kayla! Love you both. xx

5 thoughts on “My Baby Brother Gets Married, Pt. 3”