I wasn’t going to blog again until we returned from the States hungover with love and memories (and booze, of course) after a weekend of celebrating my brother and his soon-to-be wife. Then, I got an e-mail from my other ‘brother’ (my brother’s best friend/best man and our neighbor growing up, who, whether he likes it or not, has been adopted unofficially into our family) that suggested he was surprised I hadn’t written about our ‘big trip’ this weekend. So, Jon, here we go…no crying, remember?! 🙂

The truth is, it is a VERY big weekend for us! My little brother is getting married! I won’t embarrass him too much in this post, but I do have a few things to say about A.

My brother is a great man. A tough guy with a big heart. Tells it like it is. Always good for a laugh. Can talk to anyone. A hard worker. Loves his family and friends like mad. Protective. A best friend. Gives awesome hugs. Just an all-around genuine person. 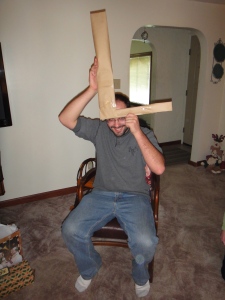 Nothing but laughs with this one!

Sometimes, we butt heads, but we always get over it. I’ve given him my share of sisterly advice and probably way more than he has ever wanted, but he always listens even if he rarely takes said advice…that’s how it goes though! And, I understand. I get it. It is his life, but I’ve always wanted only the very best for him. I know this weekend will bring nothing but the best for him. And, that? That makes me smile and get teary-eyed.

With their crazy pup!

A has had a few girlfriends throughout the years and none of them were ever good enough…this is my completely unbiased older sister opinion, by the way, and not his words! But then, he met K. I remember it like it was yesterday…we were talking on the phone as I drove home from work when I lived in Washington. He had called to tell me he had a date with this girl and I could tell that A really liked her. I could tell this one was different.

This was in January 2010, and I didn’t actually meet her until November 2010, but I already liked her without meeting her. (Gasp!) She makes my brother happy and that meant the world to me. I’m so thrilled for the two of them as they start this new adventure together. And, Richard and I can’t wait to be part of their big day on Saturday!

Cheers and big love to my baby brother and his soon-to-be wife! We are beyond thrilled for the two of you!

One thought on “It’s going to be a great weekend!”